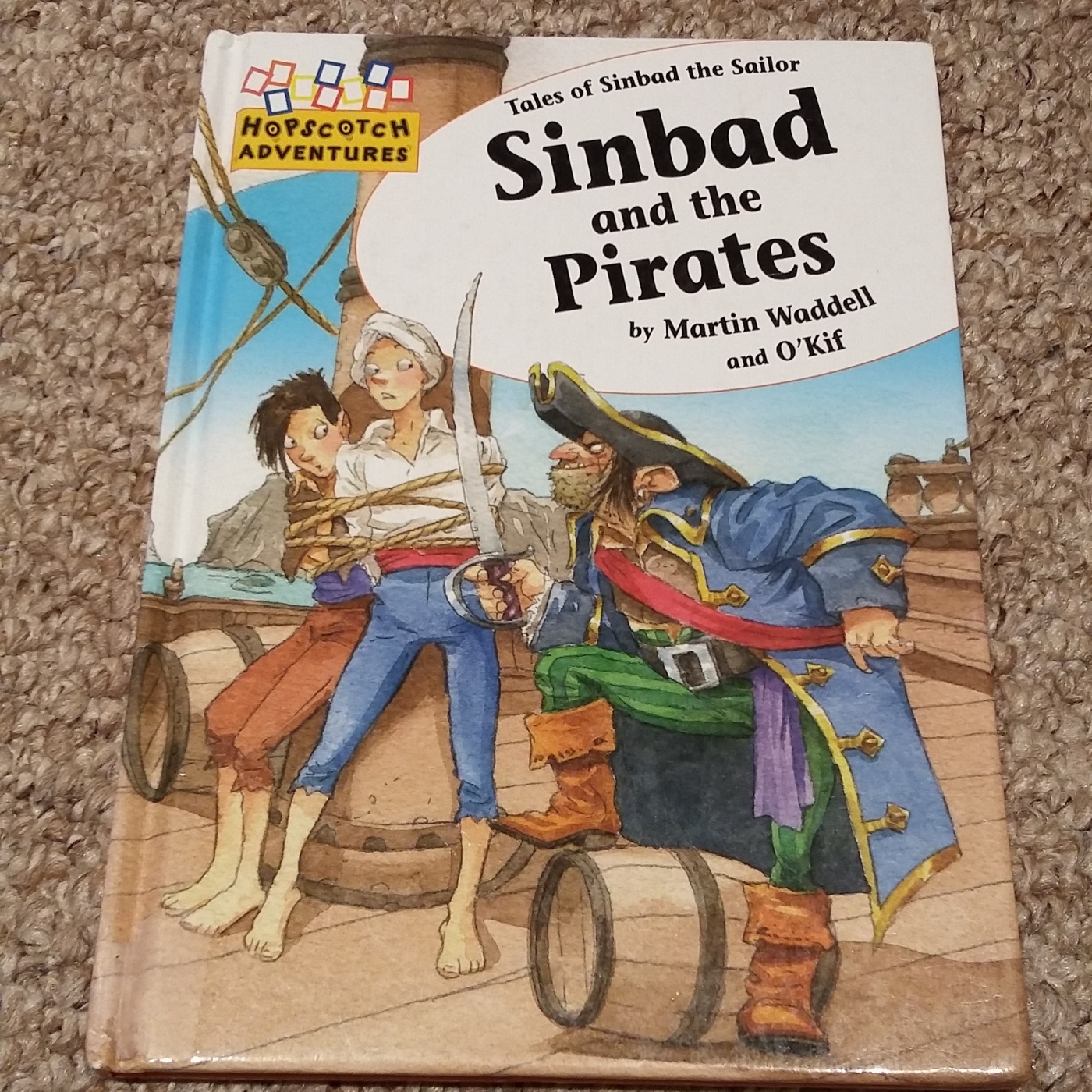 Continuing our theme of pirate stories, I couldn’t miss out this one that my bigger boy borrowed from the library. We must have renewed it about 4 times now, he does not want to part with it!

Sinbad and the Pirates by Martin Waddell and illustrated by O’Kif is published by Franklin Watts, part of Hachette Children’s Books. It is part of the Hopscotch Adventure Series of reading books. My boy is still only 3 so not reading yet, he does enjoy this story being read to him though.

I wrote about another book in this series, Sinbad and the Whale, that my bigger boy also loved and was the reason we borrowed this one. Sinbad and the Pirates is a tale of Sinbad the sailor and his crew when their boat is attacked by pirates. The evil pirate crew make the sailors walk the plank in to the deadly, shark-infested waters. All except for Sinbad and his friend Ali. Sinbad attracts the attention of the pirate captain who thinks someone will pay a ransom for this famous sailor. Ali is terrified but his level-headed mate Sinbad soon concocts a plan to escape. My boy loves this part the most as part of the plan involves tricking the pirates into putting barrels on Sinbad’s and Ali’s heads, they do this by shouting insults at the pirate captain. So when they start shouting “Stinky Feet! No Brains!” and calling the captain “old Big Ears” my boy can’t stop laughing!

Sinbad’s plan works and the pirates are defeated. Sinbad and Ali are rewarded with “a chest full of gold doubloons.” For some reason, my baby boy finds the word “doubloons” very funny so we repeat this bit several times for him!

As a reading book there is definitely a lot of content to challenge someone who has learnt to read simple stories. The vocabulary is varied, I like the use of unusual words, like “doubloons”, being included, it lead us to search for the meaning and pictures so we learnt about pirate treasure in more detail. This book is obviously aimed at children slightly older than my 3 year old and I was a bit worried that he would have been scared by the rather fierce looking pirates and the sharks in the water. He wasn’t, I think he enjoys anything about pirates and maybe doesn’t recognise how scary they might seem! For older readers, the illustrations are great as they do look like a frightening pirate crew and compliment the exciting story really well.

I have seen more of the Sinbad series on the shelf in our local library so if my boy can ever bring himself to part with this one I’m sure we will be borrowing more!

There is a good list of some of the Hopscotch Adventure books, including this and other Sinbad stories here: