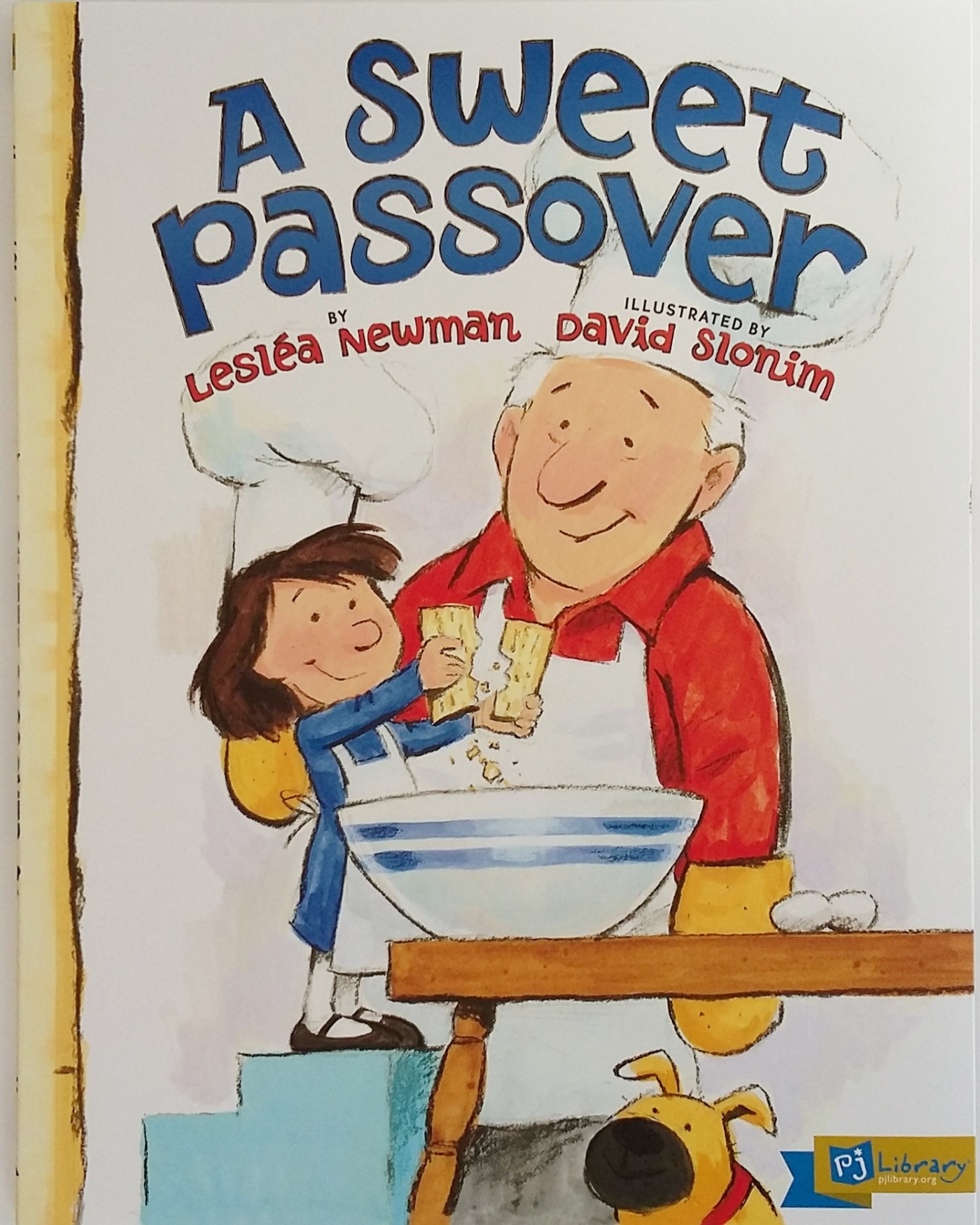 Passover is in full swing so we thought we’d share one more Passover book. This is another gem sent to us by PJ Library A Sweet Passover by Lesléa Newman, illustrated by David Slonim and published by Abrams Books. 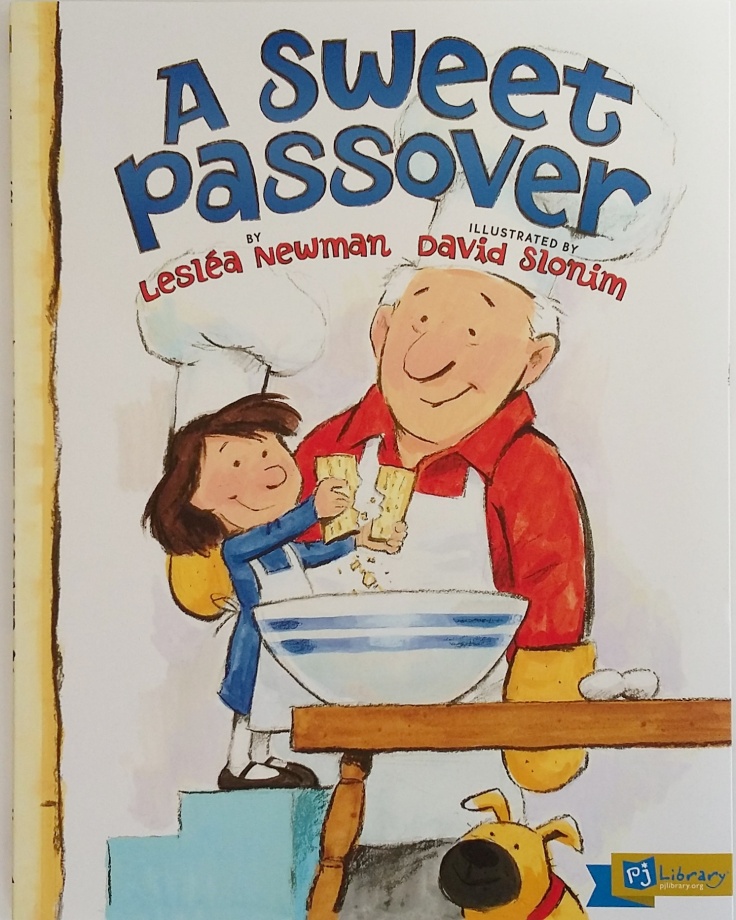 This story follows a little girl called Miriam as she celebrates Passover with her family. Miriam loves Passover, she loves all the details of the Seder (the traditional family meal at the start of the festival) she loves being with her family, but most of all, she loves matzah. Matzah is a special food that Jewish people eat during Passover, it is unleavened bread, bread that hasn’t risen. We eat it to remember when we were freed from slavery in Egypt and had to flee so quickly that we didn’t have time to let our bread rise.

Miriam eats matzah with a different topping and with a different family member every day and even has a matzah patterned bed cover. But by the last day of Passover she is well and truly fed up of matzah and, much to her families dismay, says she will never eat it again. That is until her Grandpa introduces her to matzah brei (matzah fried with egg), and after a lovely message from her family members about the importance of eating matzah on Passover she decides to try some…. and loves it!

The illustrations are colourful with soft charcoal lines and cheerful characters. The pages are decorated with matzah everywhere and one even shows Miriam atop a giant mountain of matzah.

The story really got my bigger boy excited about Passover and having matzah brei. At the end of the story, Miriam and her Grandpa make matzah brei together, such a heart-warming scene of passing on an old tradition to the next generation.

For Jewish families like mine there are so many familiar details which gives the whole story a warm and homely feeling. One of the best details I found was the inclusion of lots of Yiddish phrases. (Yiddish is a language that was mainly spoken by Jews who originated from Eastern Europe, it is a bit like Hebrew and a bit like German) Yiddish is still spoken by some Jews but even for those who don’t speak it there are plenty of Yiddish words that are interspersed into every day English vocabulary. The family in this story do just that, as do we. So it’s a lovely touch to see these words in print and be able to read them aloud. Just as the Grandpa passes on the tradition of matzah brei to Miriam, the use of Yiddish in the book passes these words on to the next generation. For those who don’t understand any Yiddish there is a helpful glossary at the back of the book which also explains some of the other words to do with Passover.

This is a great story not just for those who are Jewish but for those who are unfamiliar with Passover and want to learn more. The warmth of the family and sense of occasion can be related to any festival or big celebration that involves getting all the family together. There is a short write up of the story of Passover at the back of the book and of course, the all important recipe for matzah brei!

In case you have never seen matzah before, this is what they look like: 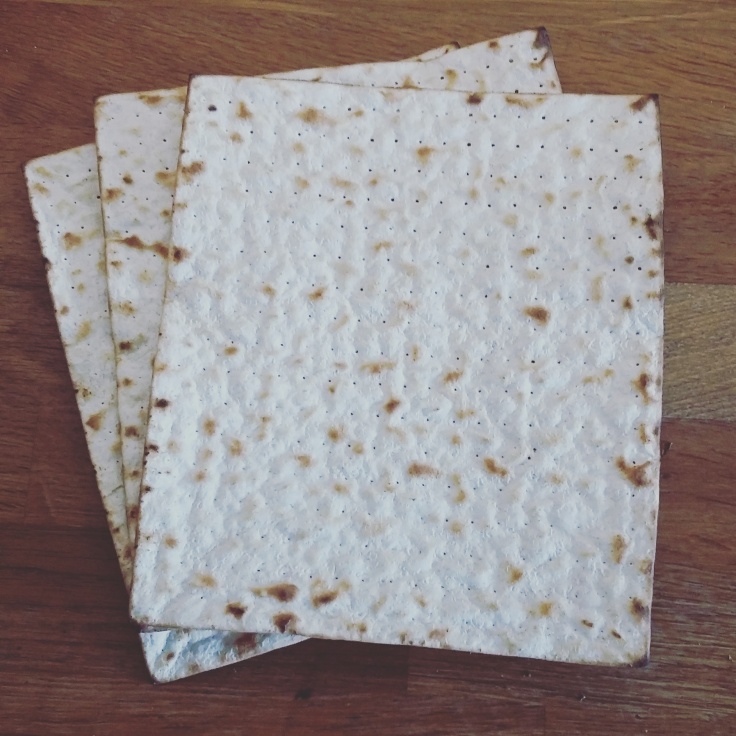 They are like big crackers, quite similar to water biscuits.

To make matzah brei we break the matzah into pieces and soak in water.

Then we beat some eggs (I would say one egg per slice of matzah used) drain the water off the matzah and then cover with the beaten egg. You can add salt, pepper or other seasoning here, maybe milk too. You can also soak the matzah in milk instead of water.

Once the matzah has had time to soak up the egg, melt some butter in a frying pan and pour the eggy matzah mix in. I like to fry mine up so it is almost like a frittata style omelette but you can scramble the eggs a bit or use less egg to make it a bit more like fried bread. The choice is yours! 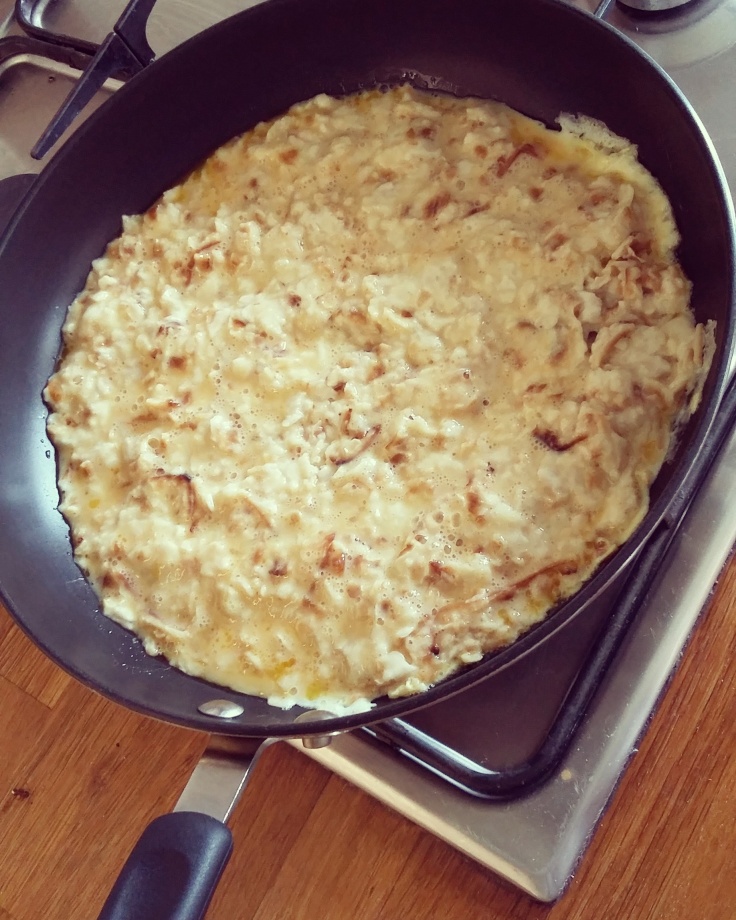 Once it’s cooked on both sides (I finished the top off under the grill although you can of course flip it if you think it will hold together) serve with a topping or sauce of your choice, or eat just as it is.

I meant to take a picture when it was cooked but we started eating it and I forgot! There were only three slices left when I remembered… 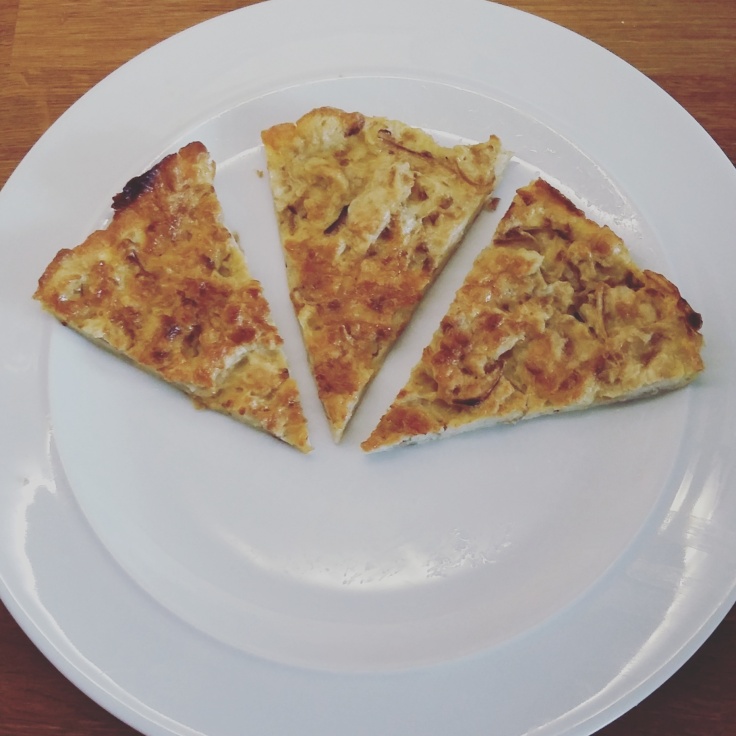 Matzah brei is a staple food in so many Jewish homes and delicious too, so much so that Michael Rosen wrote about it in a poem called Don’t Tell Your Mother, you can watch him perform it here:

You can find out more about the author Lesléa Newman and her writing for children on her website here:

A zissen pesach! (Yiddish for: Have a sweet Passover!)

6 thoughts on “A Sweet Passover”