The Day War Came, a poem written by Nicola Davies was originally published in The Guardian in response to the UK government denying entry to child refugees in 2016. It sparked the project #3000chairs which invited people to post images of an empty chair on social media. The poem has now been turned into a picture book, illustrated by one of the many people who shared an image of an empty chair, Rebecca Cobb and published by Walker Books. 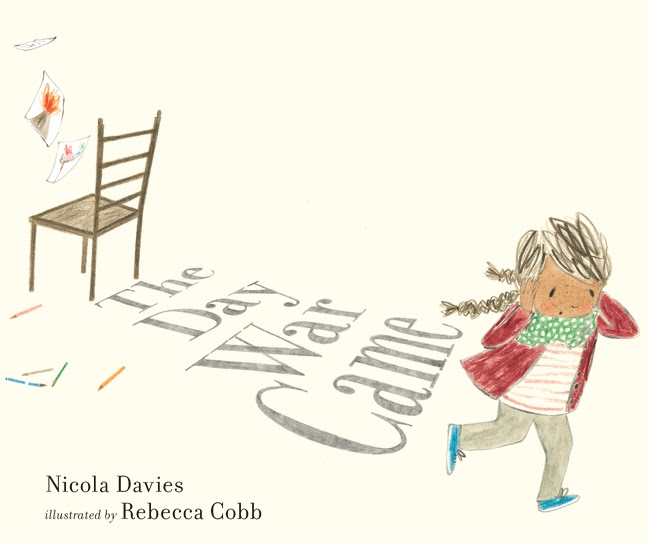 Written from a child’s point of view, Nicola Davies’s poem describes the devastation war causes when it arrives, out of the blue, in this little girl’s innocent life. One morning everything was normal, flowers on the windowsill, drawing pictures at school but by the afternoon, war was here and everything changed. 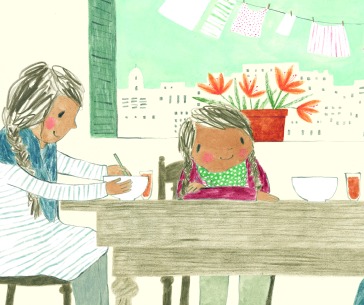 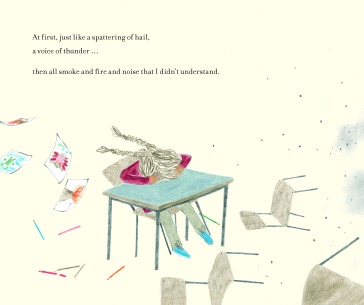 Finding herself scared and alone she begins to run, searching for safety. But no matter how far she runs away from war she finds that war follows her and stops her from finding help.

We can all learn so much from the kindness shown by the children who bring their chairs at the end of the story. To look past war and see a fellow human who needs help.

Rebecca Cobb’s illustrations are incredibly powerful, with moving and poignant imagery that further highlight the catastrophic consequences of war on children’s lives.

We are delighted to welcome Rebecca Cobb to the blog to tell us about illustrating this new picture book. 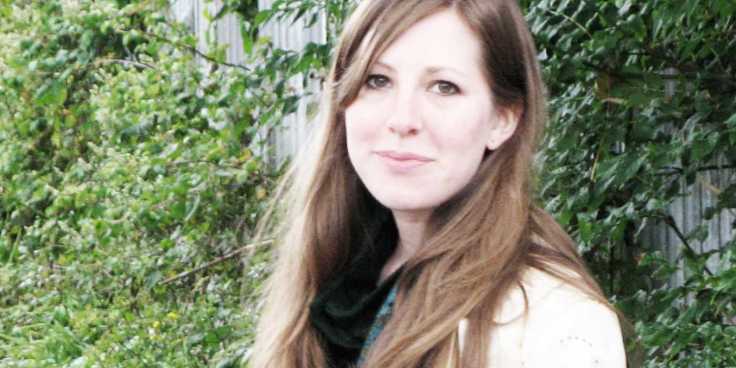 Can you tell us how you became involved in turning The Day War Came into a picture book?

I was approached to illustrate The Day War Came because I had been one of the illustrators who had been incredibly moved by Nicola’s important and beautiful poem and I had taken part in the social media campaign #3000chairs which Nicola started with the illustrators Jackie Morris and Petr Horáček, encouraging people to join in and draw a chair as a token of solidarity with all the children who were completely alone and with nowhere to go.

Your illustrations in this book are so powerful, can you describe some of your creative process behind the images?

Alongside the design of the little girl who is the main character, the first thing that I did for this book was to decide on the colour palette – I wanted to use colours which would add to the symbolism of the poem – the darkness of graphite pencil against the lightness of the cream, with blood-red for the little girl’s clothing and fiery orange in the flowers on the window sill, children’s drawings of volcanoes and the flames of the explosions when the war arrives.

Next I storyboarded the book, working out the layout and pacing of the whole thing and the compositions of each page. The book actually didn’t change much from my early storyboard, I think due to the powerful words I had a very vivid idea of what I wanted it to look like. From there I drew each page up in pencil and then used my light box to trace the rough drawings into final artworks. The whole process, designing, editing, re-drawing, refining and then painting the finished illustrations, took about 6 months.

The little girl in the story goes through a devastating, life changing event. Did you work in collaboration with any children and families who have been through similar experiences?

No, but I think that is the power of Nicola’s words when you read the story – you don’t need to have first hand experience of these events to be able to empathise and understand that this is a completely senseless tragedy. I did do a lot of research but I wanted my illustrations to feel universal and representative of the many thousands of children in this situation throughout the world, rather than one specific person.

Have you had the opportunity to read this book to any children and if so, how has it been received?

I’ve only just got my advance copy of the book, so the only child I have shown it to so far is my daughter who is not quite four years old. I have not read her all of the words yet because I think she is still too young to hear the full story but together we look at the pictures and talk about how the little girl has nowhere to live and nobody to look after her and she would love to go to school but they tell her there is no chair for her. My daughter is always very happy to see the little boy bringing the little girl the chair at the end of the book. Like most children, I think she sees things in a very matter-of-fact way and I don’t believe she would understand why anyone wouldn’t help the little girl. I find this very moving because as adults I think we often find excuses or just avoid thinking about this sort of thing.

What advice would you give to adults who are nervous or reluctant to discuss war and the experience of refugees with their children?

It is a very dark and difficult subject to talk about with children but one of the reasons that I think this book is so important is the positive message of empathy at the end of it. What I love about it is that it is a child who reminds us how to be kind. I think that as adults we have a lot to learn from children and rather than sheltering them from these difficult stories we need to be able to talk about them together so that we can engage with them. And hopefully our children will grow up to be much better at looking after each other and the world than we have been.

What message do you hope children and adults will take from reading The Day the War Came?

That it doesn’t need to be this way and there is still hope for humanity if we show compassion and help one another and stand up against things when we see them to be wrong.

Thank you so much Rebecca for joining us on our blog, for answering our questions and sharing these beautiful images of your creative process.

The Day War Came is out now with £1 from each book sold going to Help Refugees.

Many thanks to Walker Books for sending a copy of this book for review.

12 thoughts on “Interview with Rebecca Cobb, illustrator of The Day War Came by Nicola Davies”