Refugee Week happens every year around World Refugee Day on the 20th of June. Starting in 1998 in response to negative attitudes towards refugees in the media, Refugee Week aims to educate, build better understanding within communities and celebrate the lives and achievements of refugees through arts, cultural and educational events.

My Name is not Refugee by Kate Milner, published by The Bucket List 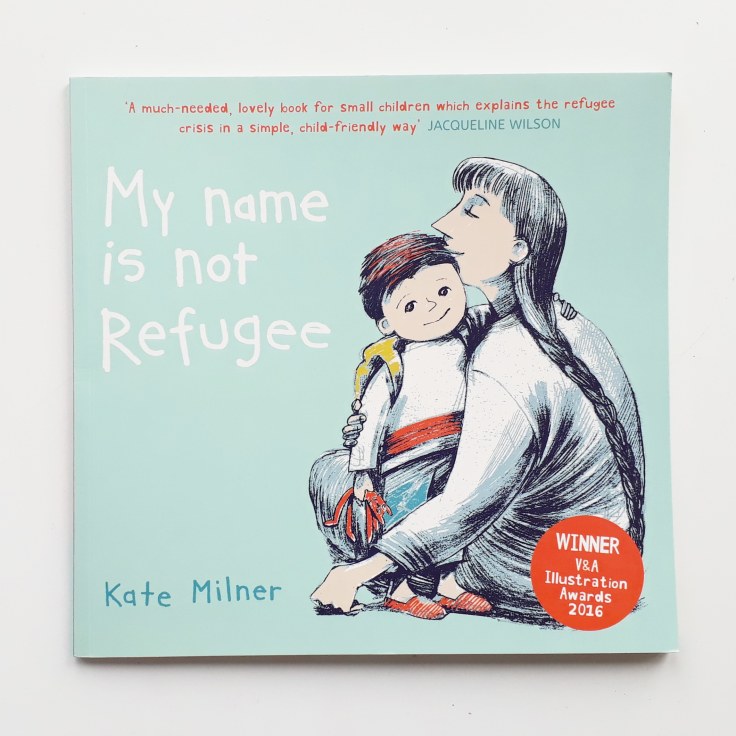 Suitable for the youngest of readers this book follows a little boy and his mum as they prepare to leave their home town. As his mum tries to explain this unusual journey it is seen completely through the eyes of the boy and the things that will be important to him; spotting lots of big cars and trucks, having to eat weird new foods, getting bored and walking for a long time.

Each page also includes a simple question to the reader about their own experiences when they go out or visit different places, a great addition that will encourage children to think about themselves in the shoes of the boy in the book.

As an adult reading this book it brings home how incredibly difficult it must be to escape your home, especially with your child. And whilst the details and different parts of this journey aren’t mentioned in the text the illustrations give us a glimpse into the strange and sometimes scary places they will spend their journey.

Conveying a powerful message of empathy and breaking down the word “refugee” to see the people behind it, this is a wonderful book and a perfect introduction to understanding the experiences of other children in the world and our communities.

“You’ll be called Refugee
but remember
Refugee is not your name.”

Buy My Name is not Refugee from Wordery.

There’s a Boy Just Like Me by Frasier Cox, illustrated by Alison Brown and published by Little Tiger Press 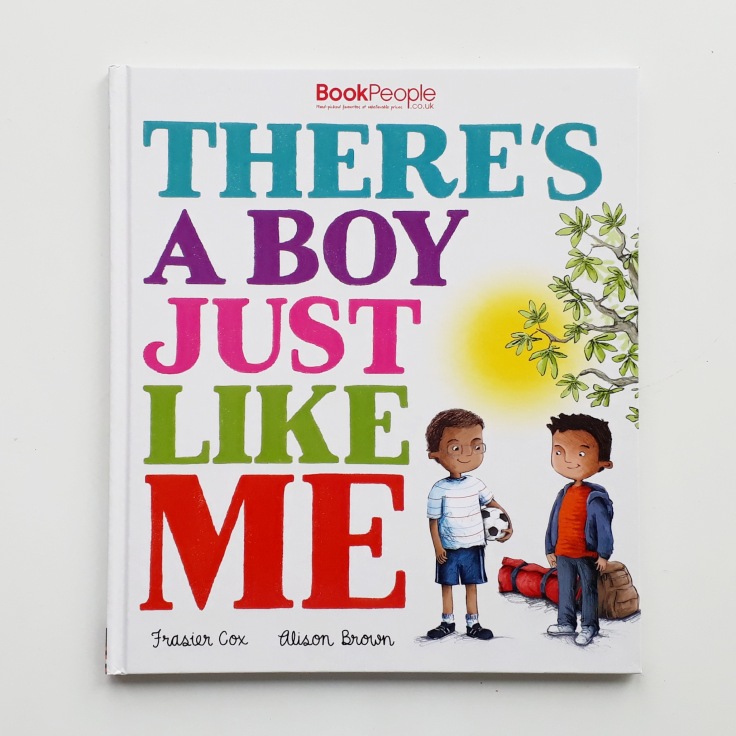 In 2017 The Book People ran a competition for children to write a story on the theme of friendship. The winner was 9 year old Fraiser Cox with his poem about a boy who was just like him and was also a refugee. Fraiser’s incredible poem was then published in this book by Little Tiger Press with 35% of profits from sales donated to Save the Children.

The story begins by introducing two boys and highlighting all the things that are the same for them; they both like eating sweets, love to play football, have smelly siblings that annoy them. Only, there are also some big differences, one boy has no home, he is a refugee. The tender story goes on to detail how war has destroyed his home and caused his family, like many others to escape to a refugee camp.

The overall message through this story is that humans are humans, we are all the same and deserving of the same rights as each other. Tender and incredibly powerful, even more so when you remember that it was written by someone so young, Frasier could certainly teach many adults to rethink their attitudes towards refugees.

“As humans we share an incredible link,
And although we are different, I definitely think
His family and people are misunderstood.
If we could find friendship, our world would be good.”

The Day War Came by Nicola Davies, illustrated by Rebecca Cobb and published by Walker Books 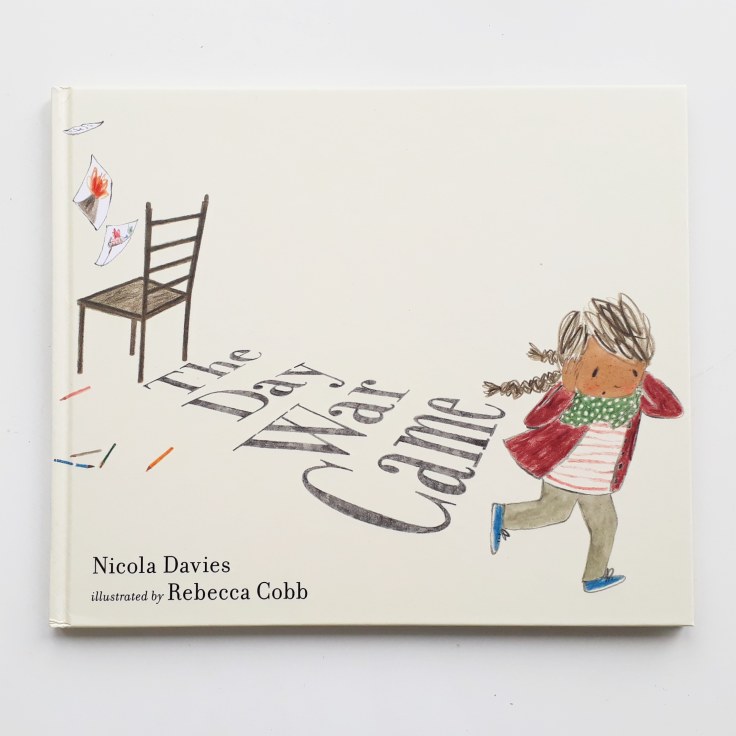 Nicola Davies wrote this poem in response to the UK government denying entry to child refugees in 2016. It was published in The Guardian and started the project #3000chairs which invited people to post images of an empty chair on social media.

Written from a child’s point of view, the poem describes the devastation war causes when it arrives, out of the blue, in this little girl’s innocent life. One morning everything was normal, flowers on the windowsill, drawing pictures at school but by the afternoon, war was here and everything changed.

Finding herself scared and alone she begins to run, searching for safety. But no matter how far she runs she finds that war follows her and stops her from finding help.

She finally finds herself at a school but is again turned away and told there is no room for her. But the children from the school find her, bringing her a chair to sit on at school.

Rebecca Cobb’s illustrations are incredibly powerful, with moving and poignant imagery that further highlight the catastrophic consequences of war on children’s lives. You can read our interview with Rebecca about this book here.

The Journey by Francesca Sanna, published by Flying Eye Books 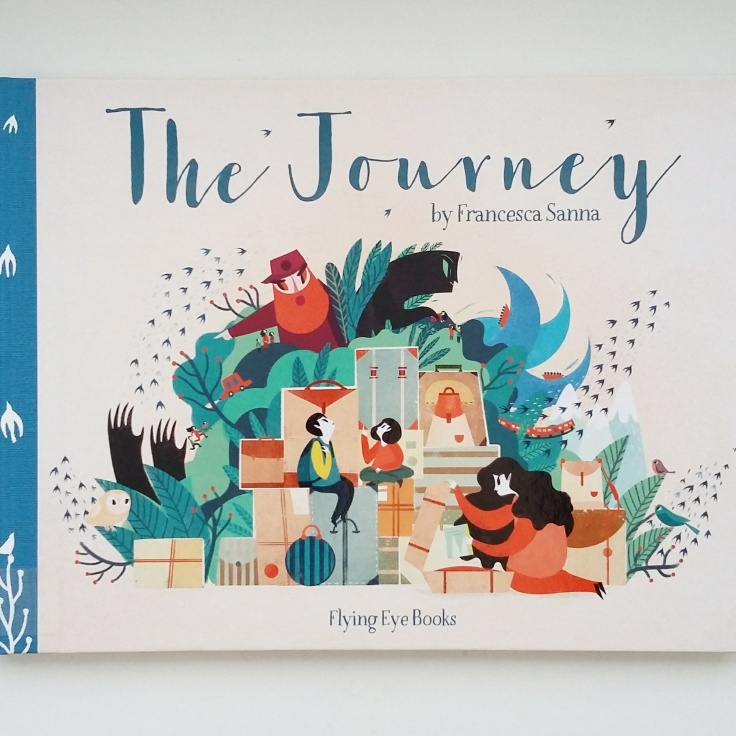 This story follows an ordinary family whose life is torn apart by war. The children’s father is killed so their mother, frightened and worried for their safety, decides to take the children and flee.

The dangers facing the family are terrifying, every move has to be made carefully, travelling in constant fear. The devastation and terror of being a refugee is depicted expertly in beautiful pictures that are both tender and raw. The imagery is incredibly poignant and give the book great depth; the black of the sea creeping in to wash away their once happy lives, the perspective of being tiny against huge danger, eyes in the darkness showing the unwavering fear of being found.

An invaluable book to help children, and adults, develop a greater understanding, empathy and tolerance towards our fellow human beings.

Francesca Sanna wrote this book after meeting child refugees and hearing their stories, through this powerful work of art she has given a voice to a desperate situation too many people in our world face.

Buy The Journey from Wordery. 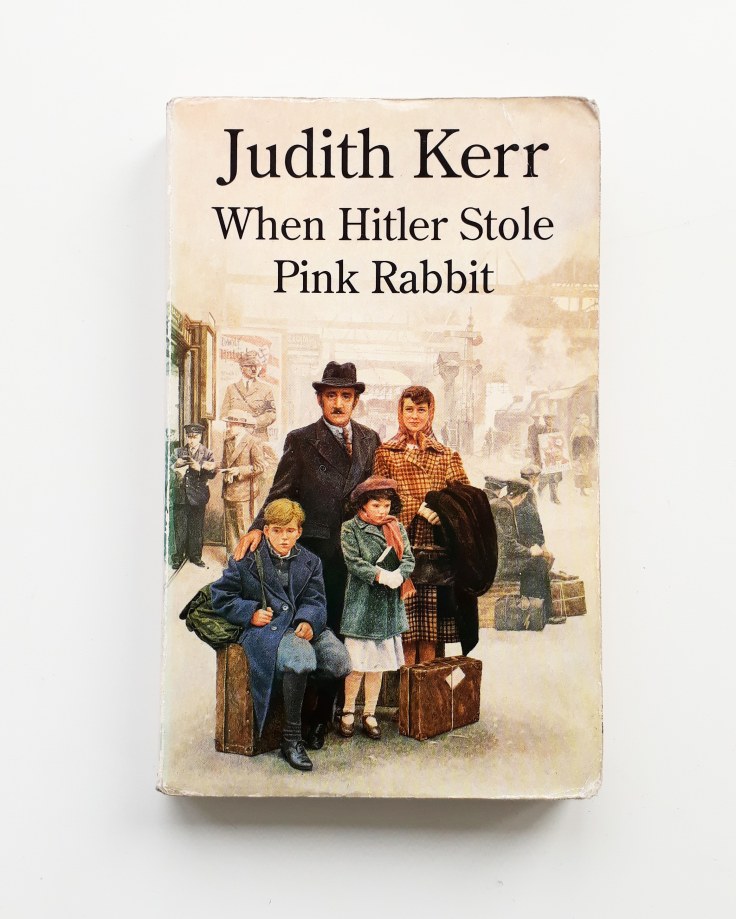 The theme of this year’s Refugee Week is ‘You, me and those who came before’ inviting us to explore the lives of refugees through the generations and this book is particularly fitting to this theme. Written by the late Judith Kerr, When Hitler Stole Pink Rabbit is based on Kerr’s own experience of fleeing Germany in 1933 to escape the Nazis.

Nine year old lives Anna in Germany in the 1930s, preoccupied with all the usual joys of childhood she is unaware of the dangerous political situation unfolding in her homeland. Until one day when everything changes, Anna comes home from school to find her Papa is gone. Anna and her brother Max are swept into a world of uncertainty as their mother tells them very few details about where their father is and swears them to secrecy.

The family prepare to leave quickly, only able to take a few of their belongings. Anna can’t decide which soft toy to take and decides against taking her pink rabbit which she has had since she was small, opting for a newer woolly dog instead. Not understanding that the move is forever Anna thinks she will be able to return and get the rest of her things, it’s only later when she realises this will never happen and so the unusual but brilliant title of this story comes from her belief that Hitler stole pink rabbit from her.

The story of their journey continues through the book taking them to Prague and then Paris until finally they arrive in London where this book ends. Two more books were subsequently published in this series following Anna’s life; The Other Way Round and A Small Person Far Away.

Kerr’s parents protected their children from the danger of the situation they faced as they fled Germany, with Judith Kerr recalling memories of how she nearly gave them away during a passport inspection because she just wasn’t scared enough. And, how during their time in Paris she exclaimed to her father how wonderful it was to be a refugee.  Just like the parents in all the books in this post

First published in 1971 this book is still as relevant today as it was then and will continue to be so. (The image above is of my own copy when I was young, published in the 90s.) There is a great deal to learn from Judith Kerr’s journey and that of other refugees like her, both in the past and now.

Disclaimer – The Day War Came was sent to us by the publisher in exchange for review, the rest we either own or have borrowed from our local library.

This post contains affiliate links that won’t change the way you shop but might make us a little bit of money… that we will probably spend on more books. (This is with the exception of There’s a Boy Just Like Me).

12 thoughts on “Children’s Books about Refugees”